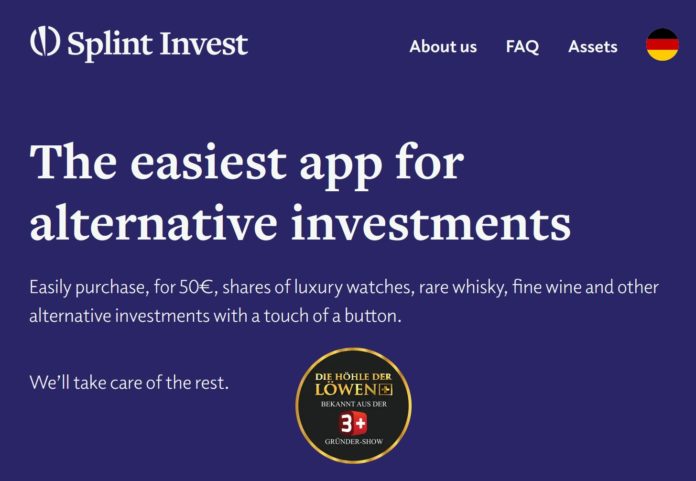 The Zug-based FinTech startup Splint Invest secured an investment of CHF 500,000 in the Swiss edition of the TV pitching format “The Lion’s Den.” With the app of the same name, the team around Solothurn-based founders Mario von Bergen, Robin Muster and Aurelio Perucca make it possible to diversify one’s portfolio with alternative investments such as watches, wine, whiskey or other luxury goods, starting with minimal contributions.

The newly acquired capital will be used, among other things, to expand into the DACH region, expand the team, and develop new asset classes. The company is also currently planning the launch of a secondary market.

In today’s episode of the Swiss edition of “Die Höhle der Löwen” (The Lion’s Den), the company of the three Solothurn founders Mario von Bergen, Robin Muster, and Aurelio Perucca was able to convince no less than three lions: together, Jürg Schwarzenbach, Lukas Speiser and Patrick Mollet invest 500,000 Swiss francs in Splint Invest. The episode was filmed in March 2022.

Expansion of investment opportunities and development into the entire DACH region.

In recent months, the startup has already been able to use part of the capital gained to expand its investment opportunities and diversify its team. With success: the investment platform for alternative investments has already gained 5,000 additional users since the show was filmed.

The remaining capital will now be used to tap into new asset classes and expand into the DACH region. The company also plans to launch a secondary market where shares held can be offered and sold ahead of time by their users. “The 500,000 Swiss francs have enabled us to grow strongly and professionalise Splint Invest’s appearance significantly. In addition, we are allowed to benefit from the wealth of experience and the network of our investors, which makes us immensely happy,” explains Aurelio Perucca, CEO of Splint Invest.