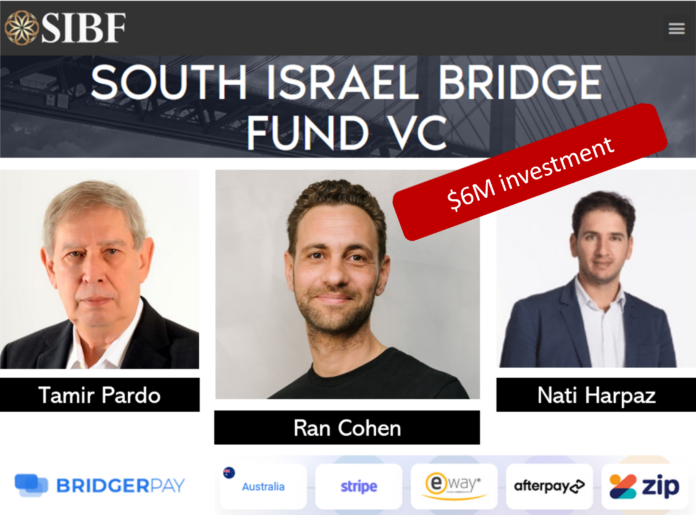 BridgerPay (PC42 profile), an Israeli payment processor founded by Ran Cohen, secured a seed financing round of $6 million. The funding round was led by Nati Harpaz and the Southern Israel Bridging Fund (SIBF) and included $2 million in secondary deals. The company was established in 2019 after Cohen left his previous job as a foreign exchange dealer.

Natanel “Nati” Harpaz joined BridgerPay in 2020 as an executive director. He seems to be important to the company as the now-closed funding round demonstrates. Press reports suggest that Nati Harpaz now invested in BridgerPay alongside SIBF.

In addition to his executive role at BridgerPay, Nati Harpaz also serves as a Director at Trade Square in Australia, which he co-founded. He is Chairman of the Board at Octomedia, and Director at his own investment firm and start-up incubator, Harpaz Group.

SIBF was not the first external investor in BridgerPay. In March 2021, FinTelegram reported that Amir Avraham Turgeman joined the company as an investor and director.

At SIBF, former Mossad boss Tamir Pardo is co-founder and president. He was the 11th director of Mossad from 2011 to 2016. In March 2021, FinTelegram informed that SIBF (www.sibf.vc) was in negotiations to take a 10% stake in Bridger AI Limited based on a valuation of more than $20 million. Specifically, the SIBF allegedly was prepared to invest $2M into the company for a 10% stake. We do not have details on how and if the 2021 transaction and the now announced funding round with BridgerPay and SIBF are connected.

Meanwhile, SIBF partner Doron Eldar (LinkedIn) has also been installed as a director at BridgerPay.

Since BridgerPay‘s inception in 2019, FinTelegram has exposed dozens of huge broker scams that BridgerPay has facilitated with its payment services. Even in the face of warnings from regulators, BridgerPay supports these illegally operating brokers as a payment facilitator and apparently also ensures that victims’ deposits are not rejected by the credit card networks.