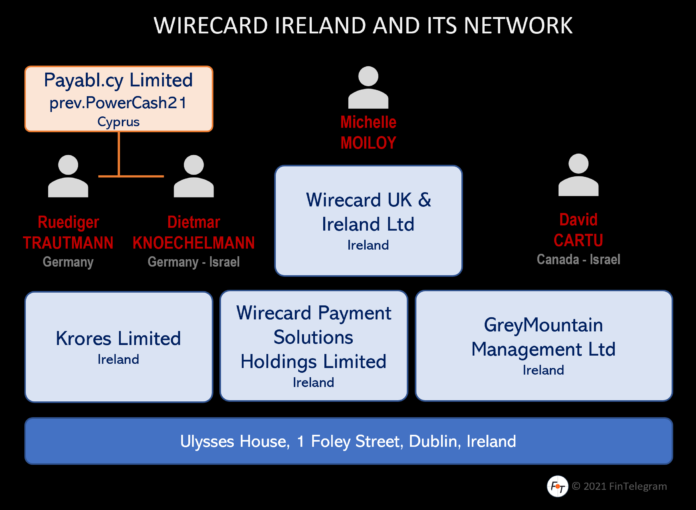 FinTelegram launched a new series about the search for the vanished Wirecard millions. The only big question at Wirecard was and is where around €1.9 billion remained. The Wirecard collapse in 2020 triggered one of the biggest financial scandals in Germany. While founder and CEO Markus Braun is still in pre-trial custody, his Chief Operating Officer Jan Marsalek is on the run. The real question at Wirecard, however, is how the organization was structured at the time and whether the money was really ever at Wirecard in the first place. FinTelegram tries to connect some dots!

The Network Of Companies

Wirecard‘s organization can best be described as amorphous and open until its collapse in the summer of 2020. It was rather a network of companies than a company. Some high-ranking Wirecard managers, such as Dietmar Knoechelmann or Ruediger Trautmann (and their family members and friends), apparently had dual functions and were also owners and managers of network companies around Wirecard.

In a personal union, these Wirecard managers were inside and outside Wirecard at the same time. In some cases, they were apparently authorized to both Wirecard and partner bank accounts and were thus able to move funds back and forth at will.

We would like to explain the “open” organizational principle at that time in detail using the then Wirecard partners PowerCash21 Limited (now Payabl) and GreyMountain Management Ltd as examples.

Dietmar Knoechelmann, a German-Israeli dual citizen, was convicted in Israel in November 2016 of abetting fraud in the Israel Credit Cards Cal Ltd (ICC-Cal) money laundering scandal carried out between 2006 and 2010 while he was CEO of the Irish Wirecard subsidiary Wirecard Payment Solutions. He pleaded guilty.

Ruediger Trautmann is one of the directors of Cyprus-based Payabl (formerly PowerCash21), a Bank of Cyprus-regulated payment institution co-founded by the Israeli Israeli Ayelet Fruchtlander Knoechlmann, the wife of former Wirecard executive Dietmar Knoechelmann. The Zatarra Report of Fraser Perring claims that Ruediger Trautmann and Dietmar Knoechelmann would have been at the center of the Wirecard fraud scheme and that Payabl (back then called PowerCash21 or PowerPay21) could have been part of the Wirecard scheme.

According to Wirecard short-seller Fraser Perring, Ruediger Trautmann and Dietmar Knoechelmann were also active together at Kronos Limited, which had offices in Ireland and was sold to Wirecard in an undisclosed transaction.

The boundaries between Wirecard and its partner companies around Ruediger Trautman Dietmar Knoechelmann and his wife, Ayelet Fruchtlander Knoechelmann, were open and blurred.

Ireland and Wirecard UK & Ireland Ltd play a key role in Wirecard‘s business in North America and Europe. This company had its offices at the address Ulysses House, 1 Foley Street in Dublin. Knoechelann’s Wirecard Payment Solutions Holdings Limited also had its offices there. And also the GreyMountain Management Ltd of David Cartu.

CEO of Wirecard Ireland was Michelle Molloy. Her son Ryan Coates served as a director of GreyMountain Management Ltd (GMM), and her cousin Danielle Earle was one of the financial managers. Michelle Molloy personally became a director in David Cartu‘s Mega Simple Solutions Ltd. The boundaries between Wirecard and its partner companies around the Cartu brothers were open and blurred.

GMM was one of the payment processors around the huge binary options fraud platforms around the Cartu Brothers – David Cartu, Jonathan Cartu, and Joshua Cartu – which defrauded investors worldwide of hundreds of millions of euros.

Wirecard, through GreyMountain Management Ltd and other vehicles of the Cartu Brothers, acted as a payment processor in the giant Israeli binary options industry.