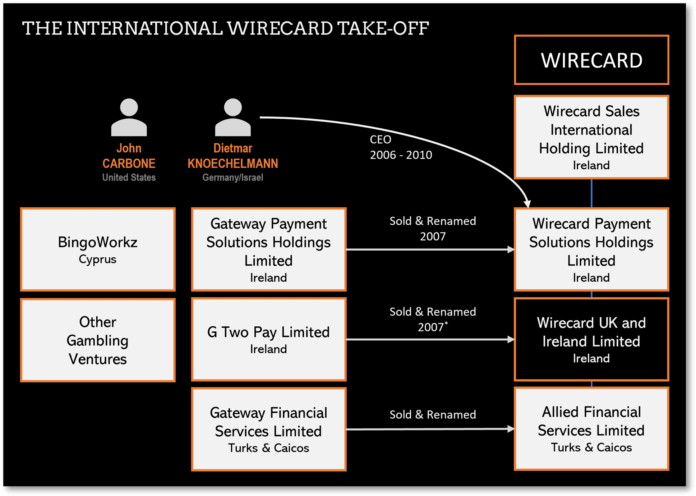 According to the latest FinTelegram report, Wirecard was a local German payment processor until 2007. The international take-off started with the acquisition of Trustpay International AG and the two payment veterans Ruediger Trautmann (2005) and Dietmar Knoechelmann (2006). Wirecard acquired companies from them in complicated and secretive transactions, creating a huge international high-risk payment volume. Here is the story of Wirecard’s internationalization.

On 11 October 2007, Wirecard announced the acquisition of Trustpay International for €48 million. In fact, through Trustpay, the high-risk payment processors and their payment volumes were purchased from Dietmar Knoechelmann and his partner John Carbone. They apparently made their transaction volume primarily with gambling companies and poker sites. Knoechelmann became the CEO of the Irish Wirecard entity. Knoechelmann’s long-time companion Ruediger Trautmann became Wirecard COO in 2005.

Both were also active at Powercash21 and Inatec Group. These payment processors are still active today under the new Payabl brand (report here).

It can be concluded that Knoechelmann and Trautmann, as top executives, were the co-architects of the international expansion of Wirecard expansion and earned an enormous amount in the process by selling their companies to Wirecard.

The company was not consolidated into the Wirecard group and operated as a satellite and was 50% owned by Fermoya Ltd, registered in the British Virgin Islands, and B.M.I.E. Ltd in the UK. Both companies are associated with illegal gambling. They were also the shareholders of Bluetool Ltd, which in or around 2010, was under investigation in the U.S. for money laundering. Among other transactions, Bluetool Ltd had transferred $70 million through its Wirecard account to Michael Schuett, who was arrested in the U.S. in 2010 on money laundering charges.

The Zatarra Report by Fraser Perring suggests that funds from illegal gambling may have flowed through Wire Card UK Limited.