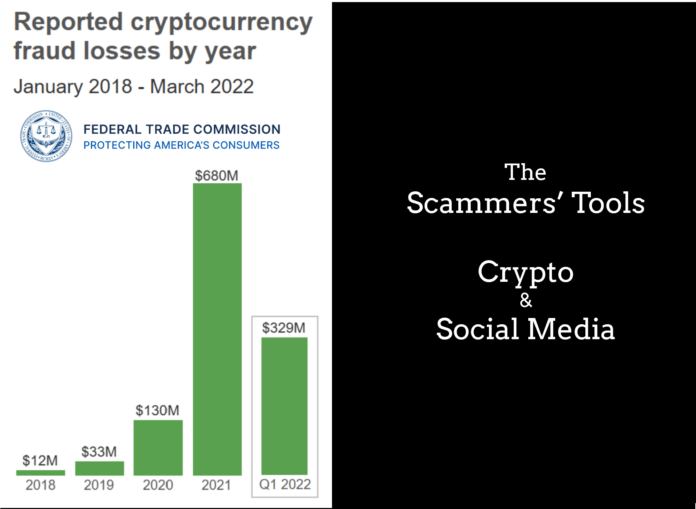 Cybercriminals and scammers embraced crypto ever since its inception. The US Federal Trade Commission (FTC) reported that since the start of 2021, more than 46,000 people have reported losing over $1 billion in crypto to scams, about one out of every four dollars reported lost, more than any other payment method. The median individual reported loss is $2,600. Nearly half the people who reported losing crypto to a scam since 2021 said it started with an ad, post, or message on a social media platform.

The reported losses in 2021 were nearly sixty times what they were in 2018. Crypto has several features that are attractive to cybercrime schemes such as investment scams. There’s no bank or other centralized authority to flag suspicious transactions and attempt to stop fraud before it happens. Crypto transfers can’t be reversed – once the money’s gone, there’s no getting it back. And most people are still unfamiliar with how crypto works.

Of the reported crypto cybercrime losses that began on social media, most are investment scams. Since 2021, $575 million of all crypto fraud losses reported to the FTC were about investment scams, far more than any other fraud type. During this period, nearly 40% of dollars reported lost to a fraud originating on social media was lost in crypto, far more than any other payment method. The top platforms used by scammers were Instagram (32%), Facebook (26%), WhatsApp (9%), and Telegram (7%).